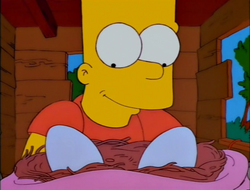 Bart's troublemaking claims the life of a bird, and in repentance, he decides to take care of the eggs in its nest — until he learns that the abandoned baby birds are actually reptilian pests who feed off birds.