Series / Under the Umbrella Tree 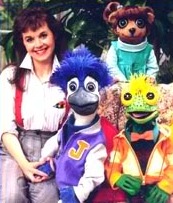 "In your imagination, you'll find an invitation...."
Advertisement:

This was a live-action children's series that aired on CBC from 1986 to 1993, and also the Disney Channel in the early 1990s. The setting was an upscale apartment in Canada, and the main characters were freelance artist Holly Higgins and her three young animal friends (actually portrayed by puppets): Gloria the Gopher, Iggy (short for "Ignatz Julio") Iguana and Jacob the Bluejay.

Under the Umbrella Tree was a pretty entertaining series overall. Gloria, Iggy and Jacob essentially have the minds of children (well, mostly; see Ping-Pong Naïveté below), so the plots did get a bit Anvilicious — but the scripts were so well written that they were nowhere near as bad as they could have been. The three animal friends were also funny, largely because they seemed to believe they were actually people.

Occasionally, guest stars (both human and "animal") would drop by the apartment for visits.

After Disney's rights to the show expired in 2005, its creator Noreen Young began selling DVD's of the series independently through the official site. The YouTube channel Encore +

also has official uploads of the series.