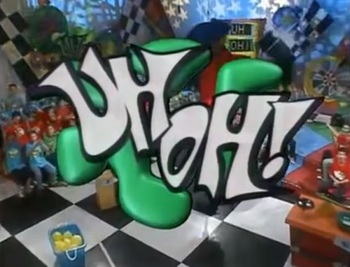 Children's game show on YTV that lasted from 1997-2003. A spin-off from the mid-1990s sketch comedy series It's Alive!, Uh Oh! saw three contestant pairs compete in various stunts, games, and challenges (determined by the spin of a wheel) to earn points. In the show's eponymous "Uh Oh!" game, a wrong trivia answer would result in their partner getting slimed (an almost certainty on each episode), where a right answer earned the team 50 or 75 points. The first round and third round followed this format, while the second round saw contestants trying to predict the winners of an off-site obstacle course for 35 points, usually called the Slime Tour. Like fellow contemporary YTV game show Video And Arcade Top 10, Uh Oh! is a fond memory for many Canadian kids from the late 1990s and early 2000s, and reruns used to air on Discovery Kids (now the Canadian version of Nickelodeon) in the 2000s.