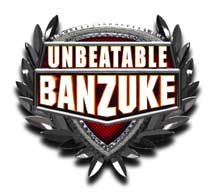 Close to being Exactly What It Says on the Tin.
Welcome to Japan's legendary Temple of Champions, where athletes gather to face the most diabolical challenges ever conceived, testing balance, endurance, and sheer strength! Competitors have one goal...beat the course! But victory is elusive, and the only constant is the bitter taste of defeat. This is the ultimate competition of Man Vs. Obstacle! Who will top the Unbeatable...Banzuke?
— Opening Narration
Advertisement:

Also known by the name "Kinniku Banzuke", which literally means "Muscle Ranking", Unbeatable Banzuke was a Japanese athletic Game Show in which competitors are challenged in one of more than two dozen events, ranging from target-events adapted to various sports, to nine-area obstacle courses, to other challenges of a different variety, all for the honor of adding their name to the list of champions, the titular BANZUKE. This show is in a similar vein to Ninja Warrior; failing once on any given event means you are out. It was shown in the United States on G4 TV, often hand in hand with Ninja Warrior. In Australia, it premiered on SBS2 on April 2 2012.

The show began in 1995, airing on a daily basis consistently until 2002, whereupon a new event known as "Power Island", caused two injuries on the Rock Attack and Rock Valley obstacles. Revised safety guidelines at the time meant that the show was put on hiatus and essentially canceled. Successor shows known as Taiku Okoku, Golden Muscle, and the original incarnation of VIKING were aired in its place, among other shows, but rarely lasted past a year. The concept of the show is still maintained in other programs, but the original Kinniku Banzuke itself is essentially over.

G4 only showed a decent handful of episodes over and over again, only getting a fresh batch of episodes in 2008, which went into rotation. However, after 65 episodes, the show was Screwed by the Network and canceled despite having more footage for other events.