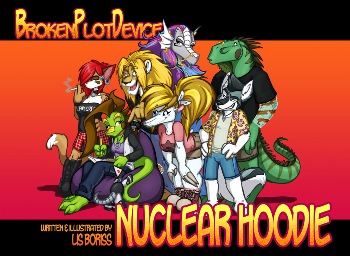 Narrator: You are a comic artist now! The path is before you. Now you just have to do it again tomorrow, and the next day, and the next... On a schedule. On time. With you eager readers hungry to digest and dissect every word, every pen stroke.
Lizardbeth: Oh sweet mother of pie! Why am I infested with terrible!?
Narrator: It's these moments that you'll treasure for years to come.
Advertisement:

is a Mundane Fantastic Furry Comic created by Lis Boriss. It takes place mostly within Byron Factory apartments, which is in turn located in an unnamed east-coast city. The comic takes place on a parallel version of Earth, as is evidenced by ninjas and giant fighting robots existing in "normal" society.

The comic mainly centers around the lives of Lizardbeth, an easily distracted webcomic artist with a massive coffee addiction; Maxine, a rather blunt and overly sarcastic woman who nevertheless seems to have Lizardbeth's best interests at heart; and Sid, the lionhearted friend of the previous two. Other characters that often appear include Zig, the slightly withdrawn robotics engineer; and Sylver, a man who considers himself god's gift to the ladies (the ladies, however, tend to find his company a bit unpleasant).

Broken Plot Device often parodies various popular video games and other things generally associated with nerds, sometimes through use of the games "Realm of Warquest" and Warmillenium 40k.

However, due to the creator's stated dissatisfaction with the comic over the last year, and a messy personal incident, the comic was discontinued in 2012. In March 2015 it came back as a Patreon-sponsored project, available to non-subscribers here