Film / I Am Not Your Negro 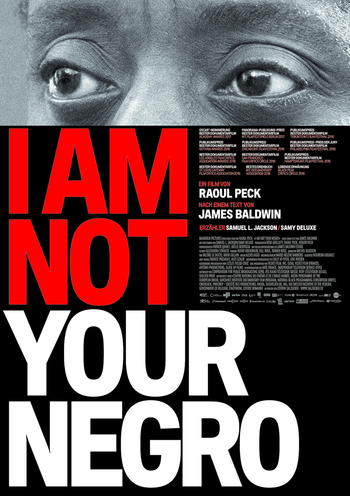 "The story of the Negro in America is the story of America, and it is not a pretty story."
— James Baldwin
Advertisement:

I Am Not Your Negro is a 2016 documentary film by Raoul Peck.

It is based on the writings of author and civil rights activist James Baldwin (1924-1987), one of the most acclaimed black writers of his generation. Baldwin left behind at his death an unfinished manuscript, Remember This House, a memoir of his recollections of civil rights leaders Martin Luther King Jr., Malcolm X, and Medgar Evers. The manuscript was used by Raoul Peck as the foundation for a documentary film about the black experience in America. Although Baldwin's voice is heard throughout either through stock footage clips or readings from the manuscript, the documentary is not strictly about him (his homosexuality is only mentioned in an excerpt from an FBI file) so much as it is about America as seen through Baldwin's eyes.

Samuel L. Jackson provides the voice of Baldwin, reading portions from the Remember This House manuscript. No Talking Heads are used, with the only voice being that of Baldwin, either from Jackson's narration or from stock footage. Produced by Amazon Studios, the film initially streamed exclusively on Prime Video, but was later made available on numerous other streaming services in the wake of the 2020 George Floyd protests, including free services like Tubi and Vudu.