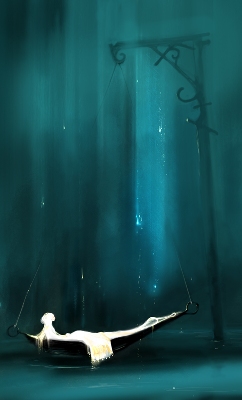 "Now you can hold color in your heart."
— Nameless Sister
Advertisement:

Turgor (Тургор), also known as Tension or The Void to English audiences, was originally released in April 2008 in Russia by indie developer Ice-Pick Lodge, known for their previous game Pathologic. The game is something akin to a 3D Point and Click adventure game with some combat elements, using a system similar to Ōkami, the player can "paint" the environment various colours to solve puzzles or attack enemies, attacks determined by the shape the player draws (an S for an area attack or an O for an explosion).

Turgor is set in a Void that is assumed to be the afterlife, or at least an afterlife. The player is a "lost spirit" who has lingered briefly in the Void while their way to somewhere else — in an act of mercy, a woman known as the Nameless Sister shares a "heart" with the spirit, enabling him to hold Color, a substance vital to survival in the Void.

From that point on, the spirit (as in you) must learn to survive the bizarre realm, earning the favor of the naked, capricious Sisters and being careful not to anger the powerful and self-righteous Brothers, guardians of the Sisters; while fighting Predators, strange and hostile beasts animated by errant color. Then there's the Void itself, which slowly drains the color from of spirits traveling through it. Good luck trying to figure out what exactly is going on!

The game debuted to good reviews, Rock Paper Shotgun in particular calling it "the most important game you are GOING TO FUCKING PLAY", and likewise getting good scores from various publications despite remaining somewhat obscure. Many have noted the game for its difficulty, as the game is quite unforgiving compared to most and will happily let you paint yourself into an Unwinnable corner if you make too many mistakes. Not only does it not hold your hand, at times it will lie to you. So it's recommended to read a walkthrough.