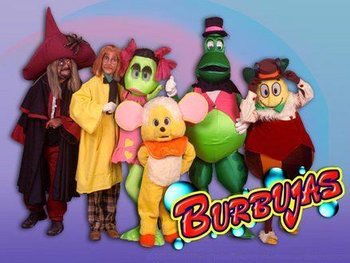 All your favorite Botargas
Advertisement:

Odisea Burbujas (lit. Bubble Odyssey) is a Mexican sci-fi/fantasy children’s educational puppet show. Created by writer Silvia Roque as a radio show, it aired for the first time in 1979 and ran for five original seasons, rebooting in 2003.

The basic premise is the adventures of scientist Profesor Memelovsky and his team of anthropomorphic animals traveling in time and space, such as into books of fiction (thanks to Memelovksy’s inventions, like a time machine and a machine that allow you to enter books), whilst at the same time fighting the evil CYDA organization made of polluters and destroyers, thus giving environmental and educational message to children in a subtle fun way. It inspired an entire franchise with comics, music and board games.

The show was very popular throughout Latin America, though not as much as El Chavo del ocho, but close, and famous for its giant animal suits known in Mexico as “botargas”.

It all starts when Memelovsky receives the visit of his four new assistants, only to discover that they are small animals; a toad, a lizard, a bumblebee and a mouse. He turns them into human-size (or even bigger), which may scare some of the people they encounter.

The main villain is Ecoloco, a dirty, bumpy looking, polluter who lives among trash.

The main ensemble consists of: