Theatre / Accidental Death of an Anarchist 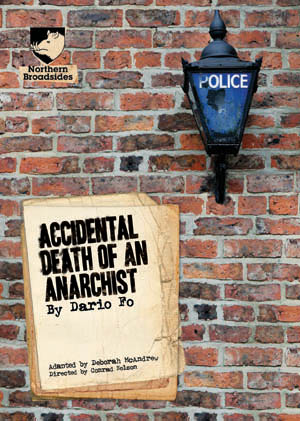 Accidental Death of an Anarchist is a farce by the Nobel Prize winning playwright Dario Fo.

The play opens with Inspector Bertozzo interrogating The Maniac, a histrionic character, on the first floor of the police station. The Maniac, however, constantly outsmarts the dim-witted Bertozzo and, when Bertozzo leaves the room, intercepts a phone call from Inspector Pissani. The phone call lets the Maniac know that a judge is due at the police station to investigate the interrogation and death of the anarchist. The Maniac decides to impersonate the judge, and successfully does so. He gets the police to re-enact the events, in the actual fourth floor room, and also involves a woman journalist named Feletti who is trying to probe the events. The play ends with two alternative endings, one with Feletti leaving the four policemen to be bombed and in the second, Feletti uncuffs the men who in turn handcuff her to the window frame leaving her to die. The Maniac then leaves the audience to decide what ending is best.