Pinball / The Machine: Bride of Pin*Bot 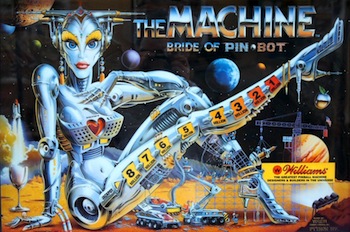 My god, she's alive!
Make me live, make me sing, make me feel like a woman.
Advertisement:

The Machine: Bride of Pin*Bot is a pinball game designed by Python Anghelo and John Trudeau. It was released in 1991 by Williams Electronics, and is the sequel to Williams' earlier Pin*Bot.

In the game, the player must assist in the construction of "The Machine", a massive female humanoid robot. The player does this by first shooting a ball into her mouth (enabling her to speak), then shooting two balls into her eye sockets (so she can see). With the Machine complete and fully operational, the job would be done, except an influx of human DNA causes the Bride to undergo an unexpected metamorphosis...

released Bride of Pinbot 2.0, a conversion kit for the game. It replaces the innards of the game with a new controller, speaker panel, and dot-matrix display. Players can choose either the original game or "Bride 2.0", which features a deeper ruleset, player profiles, achievements, new sounds and music, and animated effects. A video of the game is available here.

A digital version of Bride of Pin*Bot was available as part of FarSight Studios' The Pinball Arcade collection until their license to all Williams/Bally tables expired on July 1, 2018.