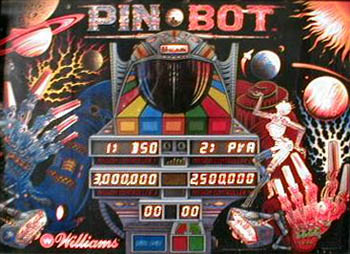 Pin*Bot is a 1986 pinball game designed by Python Anghelo and Barry Oursler, and released by Williams Electronics. It was later followed by The Machine: Bride of Pin*Bot in 1991, and by Jack*Bot in 1995, the latter of which uses the same playfield as Pin*Bot.

The Pin*Bot is a giant robot floating in space, with flippers for fingers and a face hidden behind a black visor. Lighting the lights on its chest will open the visor, revealing two empty eye sockets. Shoot a pinball into each socket to start multiball and a chance to score the jackpot. For even more points, advance through the Solar System, moving from Pluto all the way to the Sun.

With over 12,000 units made, this was Williams' second-most-popular game of 1986, behind High Speed. According to Barry Oursler, Pin*Bot was unique for the fact that it was designed around the artwork instead of the other way around; Python came up with the concept and artwork, while Oursler designed the game around Python's artwork.

A video game version for the Nintendo Entertainment System was developed by Rare Ltd. and published by Nintendo in 1988. It added various Video Game elements, such as monsters that eat your ball and force it into the outlanes and missiles that destroyed your flippers after two hitsnote The flippers returned after you drained The only consolation was that they only appeared after getting the jackpot.

Moviegoers might remember Pin*Bot as the pinball machine Tom Hanks's character buys for his loft in Big. It was one of the titles available in The Pinball Hall of Fame: The Williams Collection, and a digital version was once available for The Pinball Arcadenote This is no longer the case due to developer FarSight Studios' license for the Williams and Bally tables expiring in July 2018.