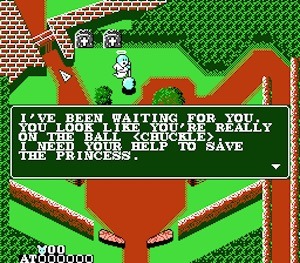 Punning a Call to Adventure is a death sentence.
Advertisement:

Pinball Quest is a pinball video game for the Nintendo Entertainment System from Jaleco, famous for its highly original mix of Pinball and Role-Playing Game mechanics.

In the Pinball Realm, Princess Ball has been kidnapped by Beezelbub, Dark Lord of the Machine, and he plans to marry her in three days. As one of the gallant knights of the land, you must storm Beezelbub's castle, then flip, bounce, and smash through six levels of graveyards, dungeons, rivers, and other dangers to reach the throne room and rescue her. Gain experience and level yourself up, gather gold along the way, then visit the Black Market Imps between levels to purchase better equipment for your journey.

In addition to the RPG Mode, Pinball Quest offered three other games, all combining Pinball with other game genres. Still, everyone remembers this game for its adventure, short as it is.