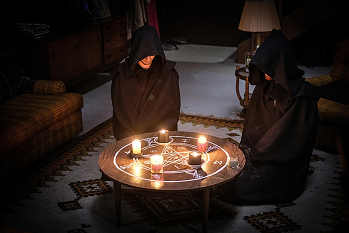 A profound mystic rite would look out of place under fluorescent bulbs, after all. This Ritual Magic is performed by candlelight instead: the candles might be there as a light source, as props, or as components of the ritual itself.

Candlelight can add spookiness or solemnity to the scene, especially if it's otherwise set in total darkness. If Black Magic is involved, it's evocative of both Fanatical Fire and Evil Is Not Well-Lit, and might pair well with mysterious cloaks and ominous magical sigils. More benign rituals benefit from fire's association with purification, protection, and enlightenment. For both, the candles can provide a dramatic Chiaroscuro and some Gothic flair.

The candles might also be part of the ritual's Spell Construction. In this role, they could be an Eye of Newt component in the ritual or, more rarely, as magically empowered items in their own right. They might also be used to define the ritual space, particularly in the case of Geometric or Hermetic Magic.

In either case, the symbolism of open flames and a circle of candlelight help to establish the ritual space as a threshold where the supernatural and material worlds can meet. For bonus points, they might be Technicolor Fire, Cold Flames, or otherwise overtly supernatural — or they might not. Compare and contrast Post-Modern Magik, where profound mystic rites might be perfectly well suited to fluorescent bulbs.