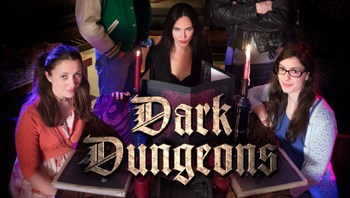 The filmmaker officially obtained the rights from Jack Chick to make it and sticks very closely to the source material.

Christians Marcie and Debbie have come to college, ready to administer their Christian faith to sinners. However, when checking out a party at the local RPG fraternity, both girls are seduced by Dungeon Mistress Ms. Frost into the world of Dark Dungeons, and they start losing their grip on reality and focusing only on the game. Will Debbie and Marcie be able to escape the demonic temptations of Ms. Frost?

The team also made a Mockumentary called Attacking the Darkness

, shot alongside this film. It portrays Dark Dungeons (or at least, a fictional film with the same plot and actors) as a serious faith-based production spearheaded by ultra-Christian Drama Queen Harmony Hope Bryant and her wedding planner husband Brady, that ran into various difficulties. It premiered at GenCon 2015, received a brief preview release

Not to be confused with the video game Darkest Dungeon or with the OSR game of the same name.

Attacking the Darkness contains examples of: