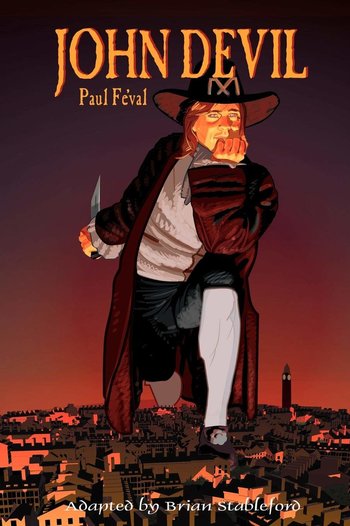 "JOHN DEVIL! That name pursues me. Someone is beneath that mask and behind that lie! Will I die mad before strangling my executioner?"
Advertisement:

In 1862, Paul Féval founded the magazine Jean Diable. Emile Gaboriau, creator of Monsieur Lecoq, was one of its editors. Lecoq later influenced the creation of Sherlock Holmes.

1817, England. Chief Superintendent Gregory Temple of Scotland Yard is mystified by the actions of a faceless crime leader who calls himself "John Devil" and is also known on the continent as Jean Diable and Hans Teufel...

Can the world's first scientific detective use his prodigious abilities to discover the secret identity of the elusive John Devil and capture him before the madman rescues Napoleon from Saint-Helens?

Written in 1861, John Devil will be of special interest to fans of detective stories, crime thrillers, classic mysteries, pulp literature and proto science-fiction.

Paul Féval pioneered the modern crime thriller, creating here both the first police detective (Gregory Temple is the first Scotland Yard Detective in fiction) and the first arch-criminal (John Devil is a proto-Fantômas) in popular fiction.

The villain's plot to use steam-powered armored warships to free Napoleon and conquer India also makes it the first techno-thriller in popular literature.Official page for the English translation by Brian Stableford