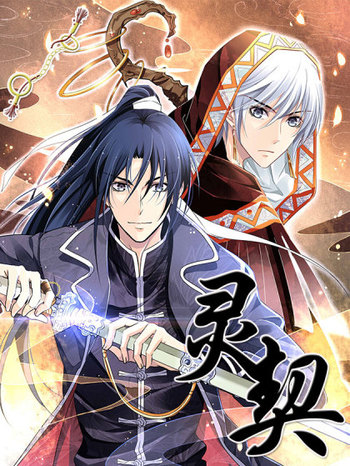 Released in 2016, 灵契 (Ling Qi， English: Soul Contract) is a Chinese Supernatural Fiction webcomic about Yang Jinghua, a poor lad that got fatally hit by a truck one day and had his spirit revived by Duanmu Xi, the most powerful priest in the world. Usually, spirits can only stay on Earth for 7 days before the thirst for spiritual energy turns them into evil beings. To help Jinghua's spirit stay on Earth for longer than 7 days without turning evil, Xi made Jinghua his Spirit Shadow, aka, a bodyguard of sorts. A Soul Contract was then established between them.
Advertisement:

Upon becoming Xi's Spirit Shadow, Jinghua was sucked into the politics of the Duanmu family and became the target of many evil intentions. To make matters worse, Xi seemed to keep lots of secrets from him. Why did Xi revive Jinghua's spirit when they did not even know each other?

Ling Qi was adapted into a donghua (Chinese animation) with the same name in 2017. The donghua was then dubbed in Japanese and had a number of aesthetic elements modified to create the anime Spiritpact. Both animation series followed pretty closely with the first arc of the webcomic (until around chapter 100). The Japanese dub can be watched legally