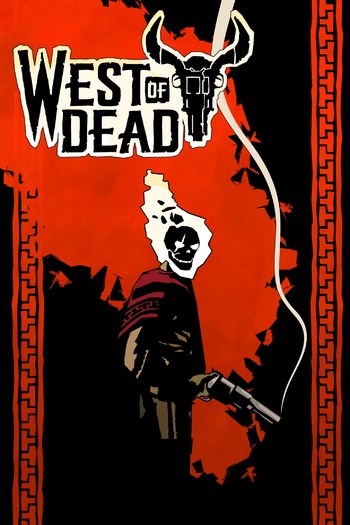 Purgatory, Wyoming. 1888.
"The good ones head East, towards the Light. The bad ones? Sometimes, they stick around when they ain't supposed to. That's where I come in...to change their mind."
Advertisement:

West of Dead is a Weird West Roguelite twin-stick, cover-based shooter with a heavy emphasis on tactics and atmosphere developed by Upstream Arcade and published by Raw Fury in 2020. Oh, and the cowboy with a flaming skull for a head? He's voiced by Ron Perlman, who provides much of the game's narration.

Gunslinger William Mason awakens in limbo as a dead man without his memories...or his face. The afterlife isn't looking so pretty either. Something truly disreputable has taken over the crossroads, cutting off the paths on either side, twisting the land beyond any hope of consistent navigation, and drafting the damned to protect its interests.

Led on by hazy recollections of who he once was and an innate disgust at how wrong the hereafter has become, Mason walks a crooked path into the center of this loathsome labyrinth against an army of revenants and other assorted grotesqueries.

Luckily for him, he just can't seem to stay in the ground no matter how hard he's killed. And guns are in plentiful supply down in Purgatory.

This "Run" contains examples of:

"Some say a coward dies a thousand deaths, and a hero only dies once. I says a hero is someone who keeps.coming.back."