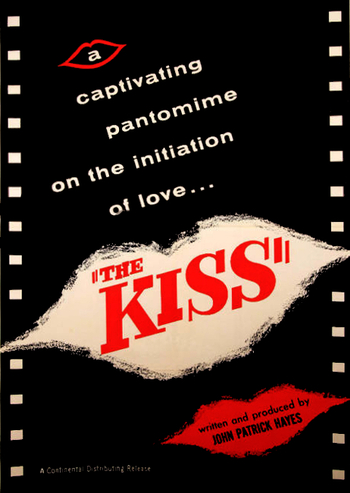 The Kiss is a 1958 short film (29 minutes) directed by Everett Chambers.

A young man in New York is lonely. Other young men and women are making love connections, but not him. He answers a "lonely hearts" advertisement in the newspaper, and meets a pretty woman—but at the end of the date, when she puckers her lips for a kiss, he panics and ditches her. He gets an instructional manual, Art of Kissing, and goes out on a second lonely hearts blind date. Surprising consequences follow.

Madlyn Rhue, who appears as the hot girl in the park, later starred in one of the most famous episodes of Star Trek, "Space Seed". John Astin, seen as the man kissing a woman on a park bench, later played Gomez Addams on The Addams Family.