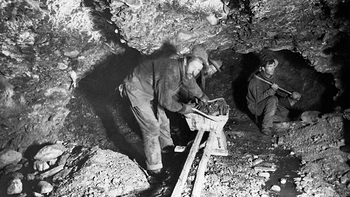 City of Gold is a 1957 documentary short film (22 minutes) directed by Colin Low and Wolf Koenig, produced by the National Film Board of Canada.

It is about Dawson City, Yukon Territory, and specifically the famous Klondike Gold Rush of 1898. Writer Pierre Berton, who grew up in Dawson City, provides narration. After making a thumbnail sketch of the town and recounting his youth playing baseball in the parks, Berton turns to the abandoned buildings from when Dawson City was a much bigger gold rush town, and how he and his friends used to play in them. This is a segue to the main subject of the documentary, the famous Klondike Gold Rush

This short film is the Trope Maker for The Ken Burns Effect.