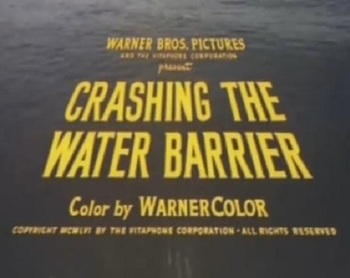 Crashing the Water Barrier is a 1956 short film (9 minutes) directed by Konstantin Kaiser.

It is a documentary short typical of The Golden Age of Hollywood. Donald Campbell, a British daredevil who specialized in breaking speed records on land and on water, has arrived at Lake Mead for an attempt to break the water speed record. Campbell, who will be driving an experimental jet-powered speedboat called "Bluebird", will be attempting to complete two laps on the Lake Mead course at over 200 mph, a speed called the "water barrier" because, as the narration explains, attempts to power a boat that fast over water can well result in the destruction of the boat and the death of the pilot. (In fact, that's how Donald Campbell died in 1967 at the age of 45.)