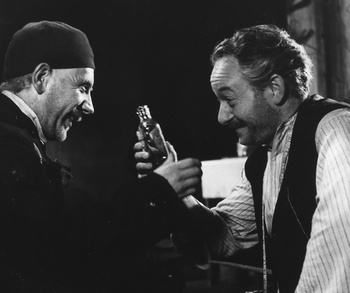 The Bespoke Overcoat is a 1955 short film (38 minutes) directed by Jack Clayton.

Morry is a poor Jewish tailor. The film opens with Morry attending the funeral of his old friend Fender, a clerk at clothing manufacturer Ranting and Company. Morry is carrying a nice overcoat, which he throws down into the grave. Back home in his shabby basement room, Morry muses about how much Fender wanted a new "bespoke" (custom-made) overcoat. Much to Morry's surprise, the ghost of Fender suddenly materializes in his room. A series of flashbacks then tell the story of Fender's attempt to obtain a new overcoat to replace his raggedy old one.