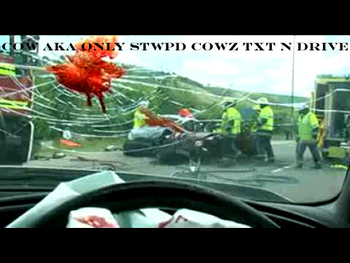 Cow – better known by its full title, Only Stwpd Cowz Txt N Drive – is a British Public Service Announcement released in 2008 aimed at stressing the dangers of distracted driving, specifically texting while driving.

Only Stwpd Cowz … – similar in format to the American Afterschool Special – tells the fictional story of Cassie "Cow" Cowan, 17, causing a deadly accident on a highway near Tredegar, South Wales. Four people, including two passengers in her vehicle, are killed in the collision. The movie was shown in many British, and eventually American, high schools to counter the growing trend of drivers who text while behind the wheel. Special effects were used to create a realistically horrific crash scene, which takes up four minutes of the film.

The main plot begins with Cow and her two best friends – Emma "Emm" Williams and Jules O'Shea – as they agree to leave work early in order to cheer up Jules, who reveals she was pregnant and had been dumped by her boyfriend (the baby's father). While driving south of Tredegar, Cassie attempts to text a cute boy, and all the girls are clearly focused on the content of the message and trying to woo the boy, giggling at the thought of how he'll respond.

And then all the fun comes to a sudden, screeching, deadly halt.

Cow's attention focused on typing a response, the car drifts over the center line of the highway and into the path of an oncoming Ford Mondeo. Cow sees it ... TOO LATE, CRASH!!!! In an instant, Cow's Ford Ka slams into the Mondeo, and the group are flailed around like ragdolls, heads repeatedly slamming into each other and causing horrifying injuries. Just when the dust appears to have settled, a third car, a Ford Fiesta, is unable to stop in time and crashes into the scene, causing yet more carnage.

Jules and Emma, both 17, are killed in the collision, along with the two parents of a baby and his older sister in the Mondeo, while the lone driver of the Fiesta is seriously injured. Cow is paralyzed in the crash – at one point, she nearly dies but is resuscitated – but will eventually recover. Much of the rest of the film deals with the consequences of Cow's actions – the grief-hardened parents of Cow's friends planning their funerals, the revelation that Cow was breathalyzed just minutes before the accident (although Cow was sober) and the entire Tredegar community ostracizing the Cowans for their daughter's part in the tragedy.

The movie became an unexpected YouTube hit and was the centerpiece of a feature story on the Today show in the United States, and won acclaim in Advertising Age's weekly Creativity Top 5 video. However, a few critics contended that the film was too graphic – the blood and realistic effects, and the young girl asking why "mommy and daddy won't wake up."

The movie was produced by the Gwent, Wales, Police Department, and made with the help of filmmaker Peter Watkins-Hughes.