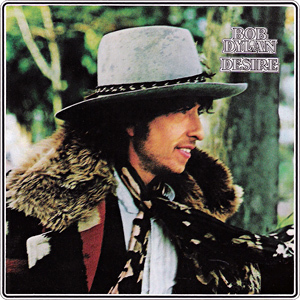 She said "You look different." I said "Well, I guess."
Advertisement:

Desire is the seventeenth studio album by Bob Dylan, released in January 1976. It was partly co-written with Jacques Levy, and recorded with his future touring band The Rolling Thunder Revue, featuring a then mostly unknown Emmylou Harris on backup vocals. The album was inspired by his (then) temporary split from his wife and return to his old neighbourhood in Greenwich Village, where the music scene had changed since the early days of the folk revival; one inspiration for putting his band together was seeing the Patti Smith Group play. The result was yet another New Sound Album.

The album is mostly remembered for the furious Protest Song "Hurricane", an account of the arrest and trial of boxer Rubin Carter who was serving a life sentence for a 1966 triple murder (and would go on to be acquitted in 1985). Following the hit album Blood on the Tracks, Desire also did well for itself.

Odd trivia note: the coat Dylan wears in the cover photo was a hand-me-down given to him by Dennis Hopper.

He asks for a trope and a pen that will write: