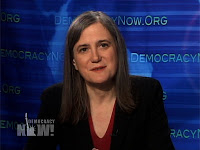 Democracy Now! is a progressive American news/op-ed show hosted by Amy Goodman and Juan Gonzalez, broadcasting out of New York City. It is the flagship program for Pacifica Radio's WBAI, and also airs in television form on Free Speech TV, Link TV, and public or cable-access stations. The show takes great pride in giving an ear to little-heard and unheard voices and being viewer-supported, while remaining independent of editorial control from corporate media outlets or government funders.