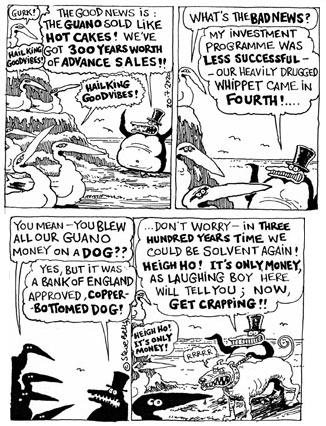 Steve Bell's If... is a daily cartoon strip which has run in the Guardian since early 1982. Born as an intentionally subversive comment on The Falklands War and initially starring a mutinous sailor called Kipling and the Falklands penguin he befriends during the war, the strip has gone from strength to strength over its very nearly thirty years and shows no sign of flagging.

Left-wing in concept and intention, the If strip has consistently and regularly provided cheer to those despairing that Thatcherism would ever end, and has provided satirical ammunition against every British prime minister ever since. Thatcher herself, the "Iron Lady", became a soul-less robot with very obvious riveting. Her successor John Major became a barely functioning wimp wearing his underpants on the outside, Tony Blair is depicted as a bulging-eyed lunatic with control freakery issues, Gordon Brown is a Scrooge-like Scottish miser, David Cameron is a giant inflated shiny condom full of hot air and Theresa May is a "evil,scary clown", due to her rise to power coinciding with a social-media driven international "scary clown" panic in autumn 2016. Current Prime Minister Boris Johnson is an self-aggrandizing nincompoop with an arse for a face.

And through it all, there are penguins...

If you are searching for the equally seditious and anti-Establishment film about a British boarding school rebel starring Malcolm McDowell, go here.