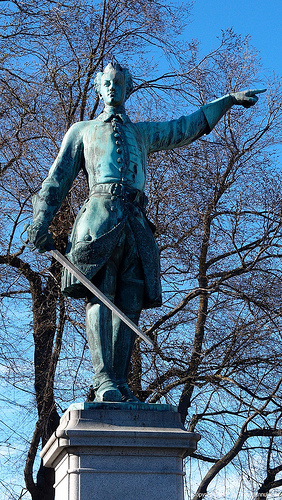 "I was chosen by Heaven! Say my name when you pray! To The Skies, See Carolus Rise!"* Pictured: "The Lion Between Four Pots", Charles XII's statue (pointing to Russia) in Stockholm
"I have resolved never to start an unjust war, but never to end a legitimate one except by defeating my enemies."
— Carolus Rex, upon the outbreak of The Great Northern War
Advertisement:

Charles XII (17 June 1682 – 30 November 1718, reigned from 5 April 1697 to 30 November 1718), perhaps better known outside Sweden as Carolus Rex (latinized form of King Charles) was a King of Swedenfull title : Charles, by the Grace of God King of Sweden, the Goths and the Vends, Grand Prince of Finland, Duke of Scania, Estonia, Livonia and Karelia, Lord of Ingria, Duke of Bremen, Verden and Pomerania, Prince of Rügen and Lord of Wismar, and also Count Palatine by the Rhine, Duke of Bavaria, Count of Zweibrücken–Kleeburg, as well as Duke of Jülich, Cleve and Berg, Count of Veldenz, Spanheim and Ravensberg and Lord of Ravenstein . Amongst the various Notable Swedish Monarchs, Charles XII was one of a kind: The only surviving son of the previous King, Carolus (crowned king when he was fifteen) soon saw himself in a time of great political strife between his nation and Russia, where tensions were heating up in a dispute for control of the Baltic territories. In this delicate time, Tsar Peter The Great decided that there would be no better hour to strike than this. The King of Sweden was a young teenage boy with little experience on the throne, and a triple alliance of Denmark–Norway, Saxony–Poland–Lithuania and Russia took advantage of this and united against Sweden. What Could Possibly Go Wrong?

But Tsar Peter did not foresee just who this teenage boy was. Charles XII did not drink, he did not spend his time with women, while he executed some very important political reforms and was a skilled politician, this was nonetheless a man who disciplined his mind, body and spirit for a single-minded purpose: War. And in this purpose Carolus displayed unprecedented brilliance. He made the Caroleans (as his army was called) into what was described in his own time as one of the best, if not the best war machine of Europe.

King Charles went to war and proceeded to completely annihilate all of his foes with the singular exception of Russia: Denmark, Norway, Poland, Lithuania, Saxony were outmaneuvered and crushed by the Swedish Army and Navy with terrifying speed. The Swedish Empire's military and political prestige reached its very height with Carolus' crushing victories over all of his foes (despite said foes vastly outnumbering his army). He turned his attention to Russia, the final foe. In his invasion Carolus achieved tremendous success at first (with one memorable episode, which Carolus immortalized in a medal, involving Tsar Peter himself fleeing at full gallop from the Swedish Army), but it was in this moment of history that Russia revealed the weapons that would doom so many other invaders after King Charles: an unforgiving winter and ruthless scorched Earth tactics. The Carolean Army was slowly whittled and beaten down by the terrible conditions, and Carolus was seriously injured and had to leave command. This proved to be disastrous with the Battle of Poltava, in which the Russians decisively defeated the Swedish. The Swedish Empire started to crumble, and the Russian Empire began its ascension.

Charles XII was exiled to the Ottoman regions, where he awaited for the time being to make a Rightful King Returns sort of situation when his time was due. After fourteen years, it was evident he had to return (namely because the Ottoman hospitality was wearing thin and because Sweden was hanging by a thread). After a two-week long horseback journey across Europe, he once more marched to war, this time against Norway. But fate has a way of making epic stories less-epic. During a siege, Carolus Rex was fatally shot in the head at the age of 36. To this day, it is unknown who shot him. Theories range from a Norwegian sharpshooter to his own brother-in-law, attempting to take hold of the throne (which he later did), though exhumations showed that the exit wound was smaller than the entry, which implies the projectile was traveling rather slowly. Thus, fire from the fortress he was laying siege to is the prevalent suspect rather than a hypothetical case of Unfriendly Fire.

His death marked the effective end of the Swedish Empire (or Sweden as a de facto military or political power) and the decline of absolute monarchy in Sweden in general. Today he is revered as a heroic, lionic figure by many historians (sometimes acquiring the moniker of "Last of the Vikings") and is a popular figure in his native Sweden. He is also unfortunately revered by Neo-Nazis.