Music / Willy and the Poor Boys 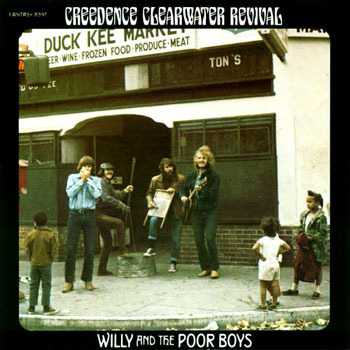 Willy and the Poor Boys is the fourth studio album by Creedence Clearwater Revival, released on November 2, 1969 through Fantasy Records. It is best known for the hits "Down on the Corner" and "Fortunate Son", the latter of which has been included in the National Recording Registry in 2013 for being "culturally, historically and aesthetically important."

Not to be confused with Willie and the Poor Boys, a short-lived supergroup from The '80s that came out with an album of the same name. Led by Bill Wyman and features Charlie Watts, Andy Fairweather-Low, Mickey Gee and Geraint Watkins, among others.

Let the Midnight Special shine a trope on me: