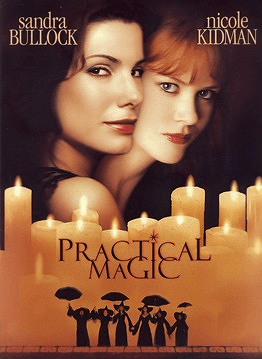 Gary Hallet: Did you or your sister kill James Angelov?
Sally Owens: Yeah, a couple of times.
Advertisement:

Sally and Gilly Owens are two sisters with an open secret: they come from a long line of witches, and their family harbors a terrible Hereditary Curse: any man who falls in love with them is doomed to die. They lost their father to the curse, and shortly after, their mother to a broken heart. As a result, they go off to live with their two eccentric aunts, Frances and Bridget. Hearing about the curse and seeing the sadness it brings, plus the enmity of the town toward their witchy family, Sally decides she never wants to fall in love, and casts a spell to protect herself from its charms by decreeing she'll fall in love only with a man she believes cannot possibly exist. Gillian, on the other hand, is a free spirit who falls into lust easily and often, usually with men who are no good for her.

As they both grow older, Sally foregoes magic entirely, or tries to. She seeks out a normal life. The well-meaning aunts give her a magical nudge, however. Sally meets and marries a young man named Michael, and they have two daughters together. For the first time, she feels a normal life is attainable, and becomes part of the town community that had once shunned her for being a witch. Gillian drifts across the country, eventually meeting and falling for a violent creep named Jimmy Angelov. Both sisters hit a rough patch when Michael is killed — another victim of the curse — and Sally falls into a deep depression. Meanwhile, Jimmy isn't quite the angel he's pretended to be.

When Jimmy attacks and kidnaps the Owens sisters, they fight back and he ends up dead. In order to cover their tracks, the women resort to Black Magic to revive him, only he comes back an even worse monster in death than he was in life. Forced to kill him again, this time they bury him in their backyard and unleash a new curse on their family name. Their troubles are compounded when a detective, Gary Hallet, shows up looking for Jimmy.

The story is probably best remembered as a 1998 film, but was originally based on a book of the same name by Alice Hoffman. It should be noted that most of the tropes here apply to the movie. The book is markedly different. The movie stars Nicole Kidman and Sandra Bullock as the sisters (Gillian and Sally, respectively), with a supporting cast featuring Stockard Channing, Dianne Wiest, and Aidan Quinn. The director was Griffin Dunne, previously known for Addicted To Love (1997). The film was not particularly successful at the box office. It earned an estimated 46,683,377 dollars at the United States market, where it was only the 45th most successful film of its year. It performed relatively well in the United Kingdom but not elsewhere.

In 2004, Sandra Bullock produced a pilot for a TV series based on the movie titled Sudbury starring Jeri Ryan, Kim Delaney, and Kat Dennings, but it didn't make it to series. The pilot was reviewed as an episode of the podcast Canceled Too Soon.