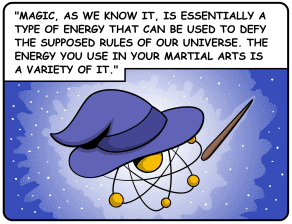 Even Supernatural Martial Arts is part of this magic system.
Tina: An electrical current just traveled from your neural pathways into the staff and made that happen.
Nico: Explain it however you want, but it needed my blood and it read my mind. It's just like Wicca.
Tina: It's science, Nico.
Nico: If by "science", you mean high-tech magic, then sure.
— Runaways (2017)
Advertisement:

Scientifically Understandable Sorcery is when magic is a way of manipulating the world, no different from technology. Its Laws & Mechanics are the Same Physical Laws that the rest of The Universe Abides by. The only mystical or supernatural thing about the change is the force causing it and the method in which it is enacted.

One could do the self-same things with technology, in the same way. The only part of it that's supernatural is the technique that the energy is directed with. It often leads to Magitek.

This is a subtrope of Sufficiently Analyzed Magic, which is magic studied using the scientific method.