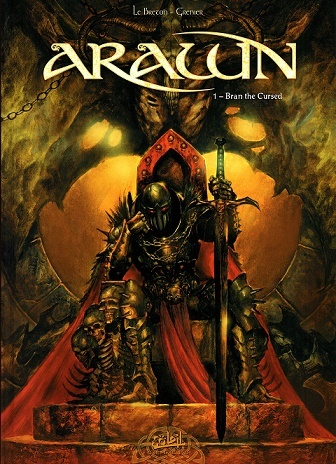 Looks like we are not in Prydain anymore.
Monster, demon, abomination. Men imagine that I am the devil. But what do they know of the king of hell? What do they know of good and evil? My name is Arawn. I am the lord of Burning Lands. The king of the underworld. The ruler of the dead. Humans fear me. They're right. I do not know pity. I despise weakness. I am the God of Wrath. The Avenging God... But it was not always this way. I was a man once, born from my mother's belly...
Advertisement:

Les chroniques d'Arawn is a French comic book written by Ronan le Breton and drawn by Sebastian Grenier originally published in the pages of the Heavy Metal magazine. Its loosely based on Celtic Mythology and tells the tragic story of Death-Lord Arawn, an Evil Overlord that has thoroughly conquered the land and how he came to be the way he is.

The unwanted son of an amazon named Siamh, he and his half-brothers were trained as a warriors and each one of them acquired magic artifacts, with Arawn gaining a Cauldron of Blood, an unholy relic with unspeakable powers and has a mind of its own. With each of Siamh's sons parting ways and gaining their own kingdoms, Arawn's older brother Math turns into a ruthless tyrant who utterly destroys all those that stand in his way and also desires Arawn's cauldron for himself. Things go From Bad to Worse when Math kidnaps Arawn's wife Deirdre (who is also pregnant with his child) and holds her hostage until his brother surrenders his cauldron in exchange for her return. An all-out war between siblings erupts, which ends up causing everyone whom Arawn knew turning against him because of a prophecy his mother had about all of her children dying and one of them (believed to be Arawn) turning evil. So naturally, Arawn decides that he might as well be the monster everyone think he is and make the prophecy come true...

The comic has been published in both French and English languages and ran for six volumes, though its schedule has been irregular.