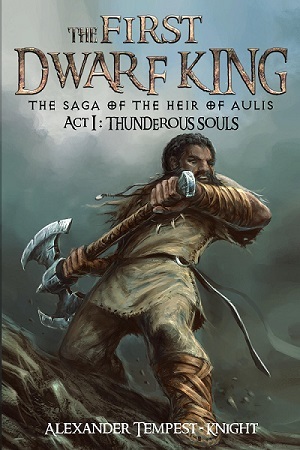 Pictured: The Dawn of an Era. Not pictured: Pointy-ears.
Advertisement:

The First Dwarf King (full title: The First Dwarf King: The Saga of the Heir of Aulis) is a trilogy of Science Fantasy stories written by troper Tempest Knight. It is the first Herezar text — it is intended to be the launch title for an entire series.

The three volumes (or "Acts") of the story are as follows:

After getting frustrated with the lack of progress he was making, the author decided not to pursue publication and instead began releasing it online via youtube

531 years ago, an army of demons was defeated by the people of Herezar, and their leader was slain in combat with Aulis, the dwarves' most legendary hero. In the interim between that conflict and the present, evil has crept back into the world.

Now, after centuries of preparation, the enemies of Herezar are ready to strike. It is only a matter of time before their plans are carried out...

The First Dwarf King features examples of the following tropes: