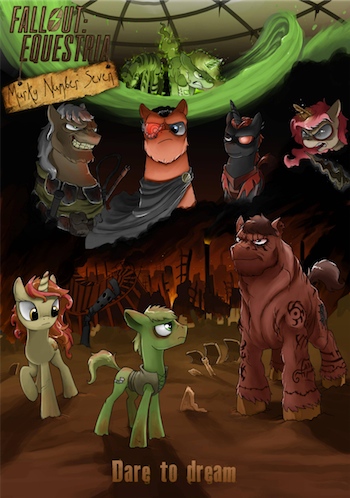 is a completed Recursive Fanfiction of Fallout: Equestria, written by Fuzzy.

The story follows the trials and tribulations of a slave named Murky Number Seven. For young Murky, the life of the labourer and servant is all he has ever known, raised without knowledge of freedom or the concept of choice. But when the brutality of his newest masters in Fillydelphia becomes all too much and the heroic escape of a certain little mare takes place before his eyes, Murky finally discovers a life worth fighting for.

Broken from the indoctrination, Murky sets out to reclaim the freedom that has been denied to him throughout his entire life. Against abusive slavers, a fatal illness wracking his body and the attentions of ponies that often cannot be trusted, Murky sets out to achieve the impossible: to escape Fillydelphia.

But... can a pony with a set of shackles as a cutie mark ever truly be free at all?

Between its unique premise, its epic length, and its infuriating habit of stringing together constant sequences of Hope Spots and Despair Event Horizons in such a way that readers must find out what happens next, Murky Number Seven is often considered one of the best of all of the Fallout: Equestria side-stories. The Tumblr page containing more information about the story can be found here