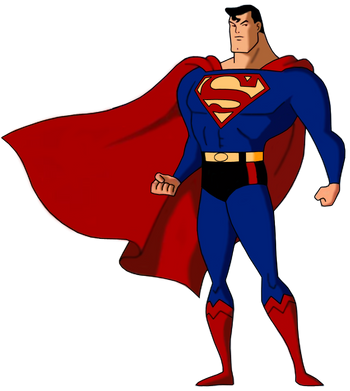 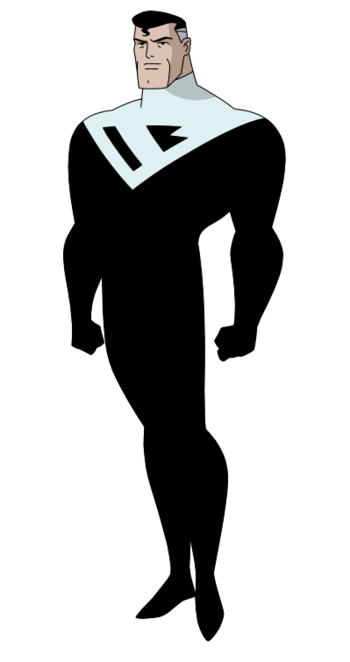 Voiced in Japanese by: Hikaru Hanada

"I always try to help people whenever possible."
Advertisement:

Superman is the quintessential Cape and Flying Brick of the DC Animated Universe.

He was a Kryptonian orphan named Kal-El who was launched to Earth as an infant to avoid suffering a cataclysmic death on his home planet of Krypton. His spacecraft landed in a Kansas field, where he was discovered by Jonathan and Martha Kent, who raised the boy as their son under the name "Clark". As Clark matured under Earth's yellow sun, he gained the Flying Brick powerset. As an adult, he moved to Metropolis to work as a newspaper reporter at the Daily Planet. It was here that he became aware of the corruption and evil in the world, deciding he must use his gifts to right these wrongs and taking the name "Superman" after a story of his deeds is published in the Daily Planet by Lois Lane, who uses the term.

After having to work long and hard to regain the world's trust in him as of a result of being brainwashed by Darkseid into leading his second invasion of Earth, Superman was the one who first suggested that he and other superheroes form the Justice League in order to deal with future threats as great as the Imperium. He was shown to be the face of the Justice League as well as the peacemaker for the other members.