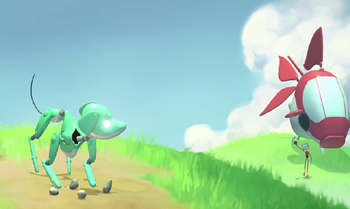 Robo-san And Wan-chan is an animated short by Ben Dallman, Eric Hibbeler, and Stephen Henry.
Advertisement:

Robo-san and his Robot Dog Wan-chan have dropped onto a planet to spend the day together. Robo-san decides to entice Wan-chan into playing some frisbee with him, which Wan-chan wholeheartedly agrees to. After a pretty impressive throw, however, Wan-chan still hasn't come back. So, Robo-san decides to go and look for him.

Robo-san And Wan-chan contains examples of: