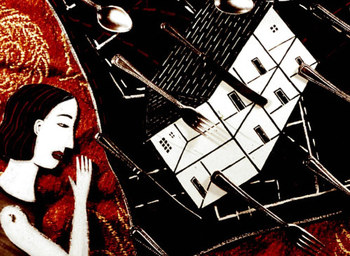 It is an impressionistic short filled with a series of images. A woman in a red dress walks down a hallway filled with doors. A drawing of a naked woman sits on a table, where it's cut into pieces. The woman in the red dress boards an elevator and go up. Textbooks in languages other than English fly by. A draftsman's triangle appears, and we see architectual plans. A building, possibly the one shown in the plans, tumbles by in the wind. Diaries float past the screen, but the writing on them is mostly illegible. Keys fit into locks.