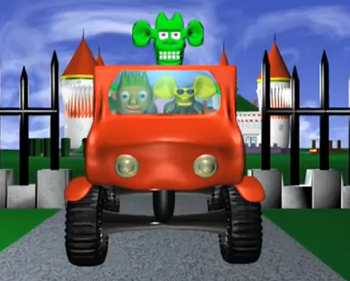 is a YouTube channel full of videos that are better seen for yourself than described. The channel is run by Ryan Dorin, a musician and animator who you might know as the six-fingered piano player from the movie Gattaca (no, seriously.) There are several ongoing series on the channel that are interconnected. The first and foremost is Ratboy's Kingdom, which follows the adventures of titular character Ratboy Genius and his exploits throughout his kingdom. Next came Happyman on the Red Planet, an exciting opera starring some new characters. It is currently unfinished, but the author has promised to end it someday. Written as a prequel to that series is the trippy space opera Galactic Superheroes. Although it's only three episodes, Galactic Superheroes sets up for future plots.

Note: For convenience, these tropes have been split up by series.
Tropes Relating to the Series in General
Ratboy's Kingdom
Happyman on the Red Planet
Galactic Superheroes
Advertisement:
Ratboy Genius Dreams Minecraft
Little King John: The Flood
Starship Genius
Miscellaneous and One-Off Episodes