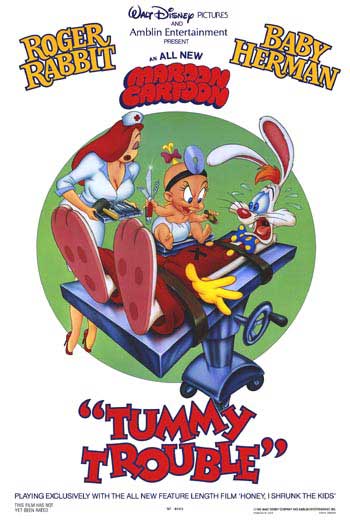 Following the smashing success of the 1988 fantasy / comedy film Who Framed Roger Rabbit, Disney, Spielberg, and Robert Zemeckis saw an opportunity to kill two birds with one stone: promote the new Disneyland attraction Roger Rabbit's Car Toon Spin on the one hand, and revive the great tradition of animated theatrical shorts (dead since the nineteen-sixties) that ran before the feature film, where the trailers are today, on the other. So they produced a series of three partly live-action, mostly animated short films starring the Toon characters from the feature.

All three shorts follow the pattern set by Something's Cookin' (the film within the original film) and, supposedly, what the titular lagomorph's big-screen escapades were generally like in the world of the movie. In each one, Roger is trusted to babysit Baby Herman by his imposing mother, who threatens Roger with some outrageous punishment should anything happen to her little darling. Inevitably, Baby Herman gets away from his caretaker and innocently puts himself in grievous harm's way, prompting Roger to leap to the rescue and get badly battered in the process. At the end, Roger will ruin the take in some amusing way (such as setting his feet on fire or accidentally deflating the planet), infuriating the live-action human director and stage crew.

It's Disney-quality animation with Tex Avery style gags. And it's just as awesome as it sounds.

These are the cartoons, and the film they opened for:

A fourth film, Waiter, There's a Hare in My Soup was planned, but never produced. Though it is mentioned in the novels.

Needless to say, the revival did not succeed (which may have had something to do with the movies they opened for), although all three shorts are available in the Vista Series DVD set and 25th Anniversary Edition Blu-Ray of the movie.

The shorts are also available for streaming on Disney+. Originally, they were located under the "Extras" tab for Who Framed Roger Rabbit?. Since then, only Roller Coaster Rabbit is listed there, with Tummy Trouble and Trail Mix-Up being moved to thier own seperate listings on the service.