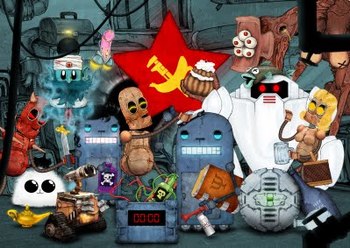 RObotzi is a Romanian animated web series created by the channel "CreativeMonkeysArmy", premiering January 20th, 2011. The cartoon follows the lives of two robots named MO and FOCA who were the first "small" robots created in Romania, and whose glory days ended once the "great" robots appeared. Now they are guarding a warehouse belonging to the National Robotics Institute.

This webseries provides examples of: