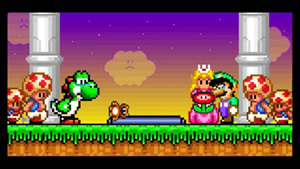 Rise of the Mushroom Kingdom is a four part flash movie series featuring the characters and settings from Super Mario Bros.. It was created by the late Randy Solem for his website, Video Game Director's Cuts and has also been featured on Newgrounds.

After Mario is killed by a squadron of Bullet Bills, Luigi leads the citizens of the Mushroom Kingdom on a quest for vengeance against Bowser. As the battle goes on, however, things turn out to be not exactly as they seem...

Inspired by Alexander Leon's equally excellent series Mario Brothers, this series is equally epic in scale, but much lighter in tone, with a good deal of Toilet Humor and Black Comedy in the last episode. It can be seen here

on Newgrounds, or here

About six years ago, a YouTuber named Asylus

created a remastered version of Solem's original movie. The plot is exactly the same, but the following changes were made:

Depending on the version and editing, the movie runs just under or just over half an hour.

Tropes included in this Video Series: