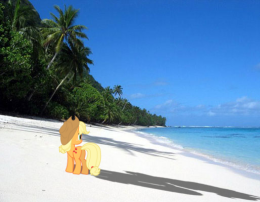 is a My Little Pony: Friendship Is Magic fan fiction written by zaponator

Applejack wakes up alone on a Deserted Island. Without her friends and no idea how she got here, the Element of Honesty has to figure out how to survive until she's rescued — or escapes. That would make the situation grim enough, but there's more to the island than meets the eye — and she might not be alone after all.