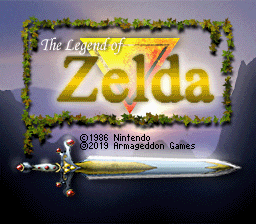 How do you play a classic game when you don't have the old systems and you want to avoid the trouble of emulation?

The answer: get a re-creation.

Zelda Classic is a mostly faithful freeware Fan Remake of The Legend of Zelda. It includes the first and second quests, along with a big Level Editor called ZQuest for making your own quests. Do not think that you are stuck with just everything from the first Legend of Zelda game: there are items implemented from A Link to the Past, Ocarina of Time and Link's Awakening to name a few; you can change the House Rules for each individual quest as needed; and with the latest versions, you can now create your own items, enemies, and script.

You can get the game at the Zelda Classic homepage

The program has been used to create over 300 fan games, all of which but a few can be found at PureZC

. Quests with their own pages include:

This page is for the computer game, Zelda Classic, NOT the first Zelda game. For that, go here.

Master using Tropes and you can have these: