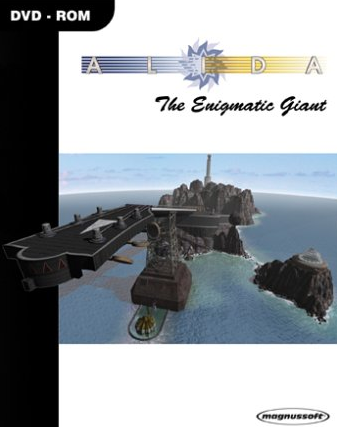 Arin: We were so overwhelmed by our success, that we could do anything. And we had the money to do it!

Developed solely by Australian game designer Cos Russo in 1998 and released in 2004, this is a point-and-click adventure/puzzle game, heavily inspired by the Myst series, but mainly Riven.

The premise is unusual: A rock band called Alida had made their debut CD and with that album breaking all previous records by 200%, all 4 members - Arin, Leval, Juno, and Luke - surpassed even Bill Gates by becoming the richest men in the world. Then Juno got a creative idea of building an enormous, fully functional electric guitar that practically rose from the sea, as a theme park named after the band. Nobody could shrug it off, though their manager, Kivas, didn't take them seriously and instead wanted the band to make a new CD. Nonetheless, they contracted several construction companies and engineers to reshape a small island off the coast of Australia, constructed hidden vaults to safeguard their portions of wealth, and built cabins in the island's bay for inspiration.

Juno investigated the island's history and found that Australian outlaws had camped on the island in the past, with bunkers in the south bay fitted with turrets to surprise enemy ships. Around the same time, he'd been investigating a strange underground device called a "Bi-sphere" which theoretically qualified as a teleporter. A year after the island's completion, though, the band had some kind of falling out due to their waning popularity and Kivas entangling their money in black market deals,

But one day, Arin heads back to Alida for reasons unknown. His wife Julia, having not heard back from him for a week, sends you to the island with a necklace that would show her identity and match the one Arin wears. It's up to you to bring Arin back from there.