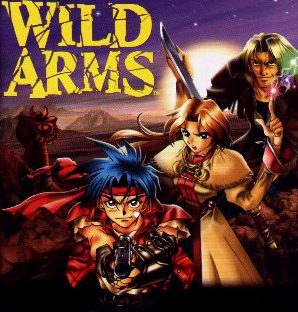 The first installment in the Wild ARMs series on the Playstation. Notable for combining the Western (as in cowboys) genre with both Fantasy and Science Fiction.

Wild ARMs is the first appearance of the eternally cursed planet Filgaia. The planet is dying after a long, destructive war with alien creatures known as demons. The weapons of the old war are blamed for the decay of the planet, and most of them are sealed away and shunned.

The story follows three characters, with a playable prologue for each.

The three find themselves chosen by the Guardian Spirits of Filgaia to combat the returning Demons, who have come to revive their ancient leader, Mother. However, it turns out all parties—even the villains—have secrets they must deal with...

This game was remade as Wild ARMs: Alter Code F for the Playstation 2.