Characters / X-Men: Rogues Gallery A to I

Back to the main character page 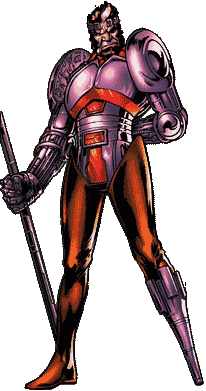 This is the way our story ends. As it was always meant to.

In the grim Days of Future Past scientist Rory Campbell developed a brainwashing process that allowed him to transform mutants into subservient thralls called Hounds, put to work hunting their own kind. After his favorite Hound Rachel Summers escaped him, Campbell’s body was mutilated and he was rebuilt as the cyborg Ahab. Tracking Rachel to the present day, Ahab doggedly pursued her for years. Though he was eventually trapped back in his own time, the Rory Campbell of today succumbed to evil as well, falling in with Apocalypse and becoming one of his horsemen. He appears as a Boss in the 1993 X-Men game.
Alpha Red 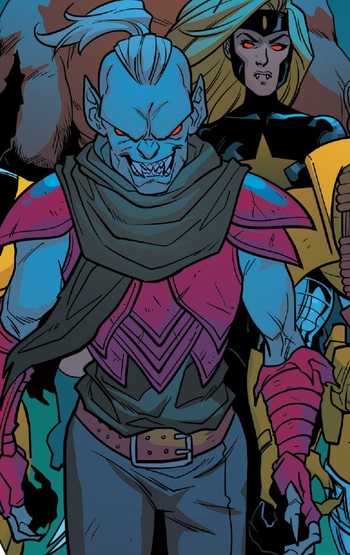 ◊ were meant to be my replacement, when I have ever been your superior.

A Super Prototype of Wolverine villain Omega Red, Alpha Red is the first in a line of Soviet attempts to create their own version of Captain America. As they had no version of the Super Soldier Serum yet, they opted to use a Russian vampire as their subject. Naturally, he proved impossible to control and was sealed away, but the Soviet collapse resulted in him being literally sold by Soviet renegades to the Fenris Twins, who quickly put him to work attacking the X-Men. Revealed in the third issue to be Dracula's bastard son.

For tropes related to this character's original incarnation, see The Tomb of Dracula. 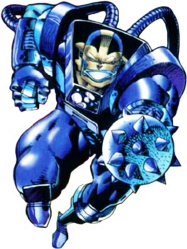 I am as far beyond mutants as they are beyond you.

Originally introduced for the X-Factor title, Apocalypse is an ancient mutant who lives by one very simple credo: survival of the fittest. Believing that conflict, war and strife advance civilization, Apocalypse has influenced human history since the days of Ancient Egypt, and after centuries of subtle manipulations he is ready to bring about his long-planned-for Age of Apocalypse in the present day. By sheer scope of power and ambition he has become generally regarded as the biggest bad among X-villains.

See Apocalypse for more on him.
Advertisement:
Arcade 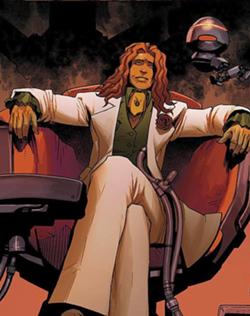 I promise... I've given up games of murder. I'm done with death traps. Okay... maybe a tiny little death trap.

"Methinks it's our move now. But what to do? What to do? See, doll, there's no more profound human interaction than a game. Each move is dictated by the previous moves of your opponent. Your turn exists only in concert with the turns of another. It's like dancing or making love, only fun. A communion of souls. But I also just want to kill them. Tough decision."

A wealthy assassin who grew bored with conventional killing, so he designed a gigantic killer theme park he dubbed Murderworld. Even after that, he grew tired of the lack of challenge, so he redesigned it so he could try to kill superheroes with it. He's yet to actually kill any superheroes with Murderworld, but he has enough fun just watching them escape. He is the Big Bad for Spider-Man and the X-Men in Arcade's Revenge and a significantly lesser-known game, X Men Madness In Murderworld. He also appears in the comic Marvel Rising (2018).
Azazel 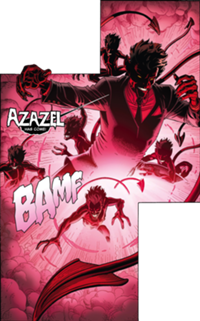 A demonic overlord and Nightcrawler's biological father. Millennia ago, he was banished into the Brimstone dimension by the Cheyarafim, a group of xenophobic mutants with angelic appearances. He possesses an impressive amount of powers, teleportation included. He appeared in X-Men: First Class (however with a different look and reimagined backstory) and was portrayed by Jason Flemyng.

Belasco of the Corrupted

Belasco was a sorcerer in 13th Century Italy who used his knowledge of alchemy and the black arts to contact the Elder Gods (actually extradimensional demonic entities). He forged a pact with them enabling them to cross the barrier to our dimension using a pentagonal arrangement of five Bloodstones. In return, Belasco was granted immortality and immense mystical power. He was also given a demonic appearance, as he was intended to form a new race of Earth-dwelling demons.
See Marvel Comics: Demons
Black Womb 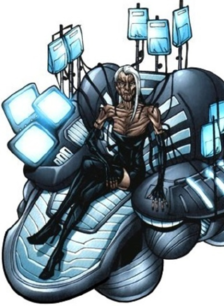 I was the first, you see. The first mutant he ever met. And I gave him the inspiration... because I was already immortal.

An American heiress born in the late 19th century, Amanda Mueller was one of the earlier mutants and a longtime collaborator of Mr. Sinister. In 1891 she was dubbed the "Black Womb Killer" after a series of mysterious miscarriages she had that caught the attention of the authorities, though she was acquitted in her trial thanks to the testimony of a "Dr. Milbury". Surviving into the 20th and 21st centuries thanks to her mutation, Mueller grew increasingly deranged thanks to the uniquely Blessed with Suck nature of her immortality, ultimately turning on her longtime ally Sinister and attempting to become The Starscream to him. Though she was Out-Gambitted, Mueller managed to survive and escape. She is currently at large.
The Brood 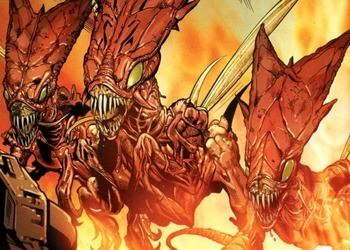 Your standard race of evil alien bug people who have a queen and wish to assimilate all life in the universe. They appear in the SNES beat-em-up X-Men: Mutant Apocalypse and in its Distaff Counterpart for the Sega Genesis, X-Men 2: Clone Wars. 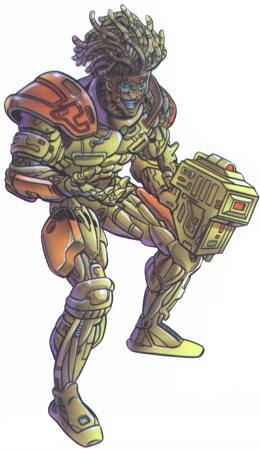 A childhood friend of Warren Worthington, Cameron Hodge teamed up with his old buddy to reunite the original X-Men team, using his job as a public relations consultant to rebrand them to the public as a team of professional mutant hunters called X-Factor. Or so it appeared... in reality, Hodge was a rabid anti-mutant racist who was using his position to undermine X-Factor and specifically his old friend Warren from within. He did major damage to the team before his ruse was exposed, even getting to see the hated Warren die in a plane crash of his own engineering, but as it turned out Apocalypse had greater plans for Warren Worthington. Returning as the Archangel, Warren slew Hodge, but thanks to a Deal with the Devil Hodge survived and returned. He is not one of the more recurring anti-mutant villains, but with Complete Immortality and an array of monstrous One-Winged Angel forms on his side he might well be one of the most powerful. He appears as a recurring Boss in the X-Men: Destiny action-RPG and as a one-time boss in X-Men 2: Clone Wars.
Cassandra Nova 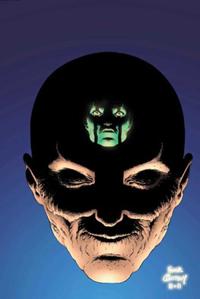 It's a special feeling, isn't it? Behind the mask of liberal respectability, with its safe opinions, we all hate the mutations. Don't we? How can it be murder when they're germs or vermin?

Of all X-men's villainesses, Cassandra is generally considered as the most dangerous. Completely amoral, power-hungry, she is on par with her brother, Professor X, in terms of psychic mastery. She has faded in the background lately but she remains unvanquished so far which means she may reappear at any time.
Changeling 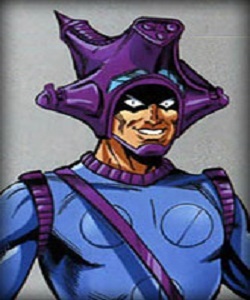 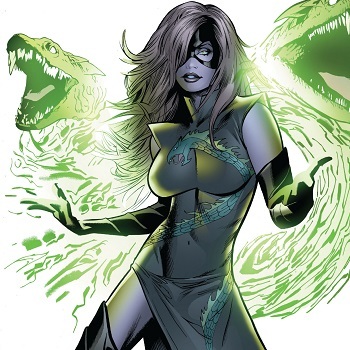 An inter-dimensional Mutant pirate of questionable sanity, Chimera lives to plunder the space-time continuum and travels with her "plasma-wraiths", super-strong half-starved creatures wrapped in black bandages with sharp claws. She has frequently found herself teaming up with other supervillains as a member of the Sisterhood of Mutants and one incarnation of Mr. Sinister's Marauders. 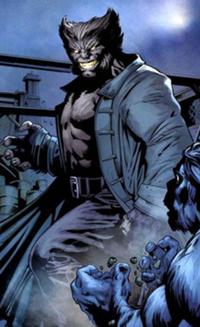 He is both gifted and savage at the same time.- Apocalypse

A malevolent counterpart of Beast of the X-Men, aka Henry McCoy, who originated from an alternate universe where he performed hideous experiments on humans and mutants in an effort to unlock the secrets of mutant evolution.
Fenris 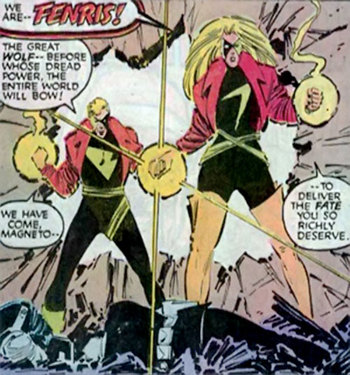 There's no escape for you, old man! Your fate — and Baldy's and the Jewess's — is sealed!

The twin children of Wolfgang Von Strucker, Andreas and Andrea Strucker believe in their father's ideology but for the most part are content to live the lives of the Idle Rich. Nevertheless, they are both powerful mutants, who first clash with the X-Men when Magneto is put on trial for his crimes.
The Genegineer 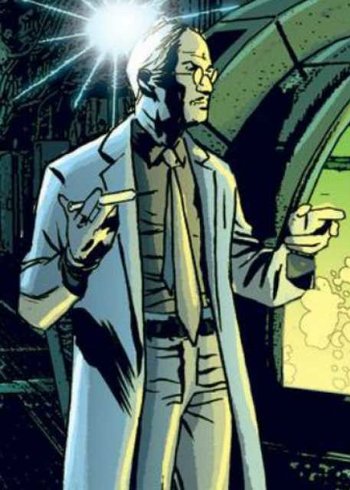 A high government official of the small, high-tech state of Genosha, Moreau was in charge of mutant affairs—Which in Genosha meant supervising the implementation of a ruthless Super Registration Act that made all mutants forced laborers for the government, under military supervision. Moreau, a highly moral man, was always troubled about the system he served (especially when his own family suffered the personal consequences of it, as his daughter-in-law-to-be was identified as a mutant), but remained convinced that it was the least bad option in a Crapsack World where rampaging superhumans would frequently cause disaster and ruin when not firmly kept down. First of all he was a patriot, always loyal to his nation, for which he was prepared to suffer and die. In a later story, this bizarrely forced him into an alliance with the X-Men against the system he had so long championed, when right-winger Cameron Hodge and jingoist President Renault hijacked the Genoshan government and steered it towards military confrontation with the United States. Hodge killed him, and the old Genoshan system died with him, soon to be replaced with a mutant-supremacist People's Republic of Tyranny.
Graydon Creed

An anti-mutant zealot who founded the hate group known as the Friends of Humanity, dedicated to killing all mutants. One of the X-Men's big political-based enemies during The '90s. Eventually, there was the reveal that he's actually the purely human son of two mutants himself — what's more, his parents are Victor Creed, aka Sabretooth, and Mystique. With this revelation, he lost all status and credibility amongst the Friends of Humanity and was eventually killed by one of his parents (shot by Mystique in the comics, giftwrapped and delivered to Sabertooth by his fellow high-rankers in the 90s animated series).
Haven 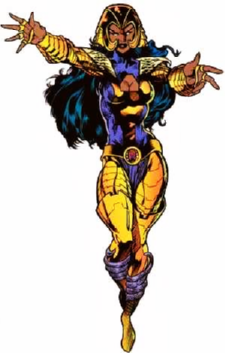 Seven hundred years from now, three-fourths of the population Earth will perish and from their ashes a new world will evolve. Why wait?

A Hindu spiritual guru who preaches of the coming of a new age where humans and mutants have evolved into one race. Secretly, however, she leads an international network of terrorists, as she believes the new age can only come about after a prophesied period of great destruction. Naturally, this draws her into conflict with X-Factor and the X-Men.
Holocaust 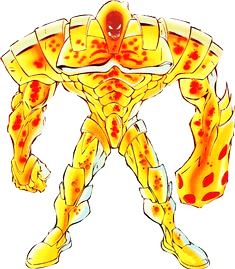 I am the son of mighty Apocalypse, and you expect me to obey you?

The ruthless and omnicidal son of Apocalypse from the Age of Apocalypse reality, he was one of four exiles who escaped its collapse and made his way into the main universe. He appears as a Boss in X-Men Legends II, where he is voiced by Peter Lurie.