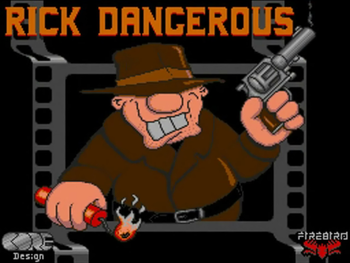 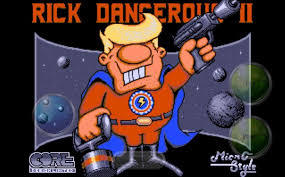 Rick Dangerous, released in 1989, and its 1990 sequel Rick Dangerous 2, are platform games by Core Design, designed for the Commodore 64, Atari ST, and PC.
Advertisement:

Rick is armed with a pogo stick (which can temporarily stun some enemies), gun, and dynamite. Both gun and dynamite have limited uses, which are replenished by certain Power Ups. The first game starts out with some adventures in the jungle and pyramids, when you find out about a Nazi plot to destroy London, and have to take out their missile base. The second game starts with an alien attack on London, and has you hijacking the alien ship and taking it to their planet to stop them.