Literature / The Bands of Mourning 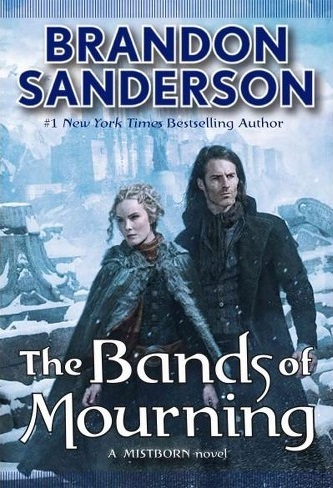 Third book in the Wax and Wayne series.

Six months have passed since Wax was called to do Harmony's dirty work, and he is finally getting married to Steris. Despite a shootout shortly before the wedding, he manages to make it mostly on time. The scars from Lessie's death haven't quite healed, but he is able to put it aside and go through with the marriage. Midway through the ceremony, however, the church is attacked, and Wax barely manages to get himself and Steris to safety in time.

Shortly before the wedding, Wax was approached by a kandra mentioning that Harmony has been conspicuously silent, and they want Wax's help to find out what's going on. He refuses, but kandra are not known for giving up easily...

And then of course there are the Bands of Mourning, the metalminds belonging to the Lord Ruler himself, said to give any wearer the godlike Feruchemical/Allomantic abilities that he used to rule the world for over a thousand years. Most people dismiss them as superstition, but some scholars and adventurers have found some promising leads, and Wax's uncle might be after them as well...