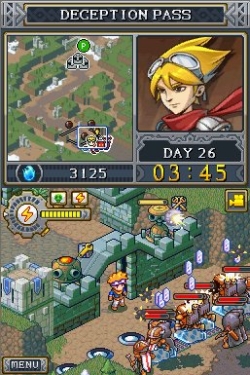 Lock’s Quest is a Real-Time Strategy-Tower Defence video game for the Nintendo DS, made by 5th Cell Interactive and published by THQ. It is a strategy game with some simple Action Game elements.

In the game, there’s a substance called “source” which is used in building pretty much anything, from walls to advanced, possibly sentient clockworks. The people who build with this “source” are called Archineers.

The story begins very traditionally as we are introduced to the protagonist, Lock. He lives in a small seaside village with his sister, Emi, and his grandfather, Tobias. He's an orphan because his parents, both Archineers, died in a war when he was young. An injured Archineer shows up and the village is soon invaded by clockworks. When Emi goes missing, Lock sets out to find her, ending a war and saving the world along the way.

The majority of the game consists of protecting source wells and people from waves of clockworks. Gameplay is divided into days, and each day typically consists of two sections: Building and Battle. In the Building section, players are usually given two to three minutes to set up the usual defences: walls, turrets, traps, and the like. The Battle section is where the Action Game elements come in, as players fight clockworks directly and repair defences in real time to fulfill win conditions, which are usually defending objectives and surviving for a few minutes. Some others include defeating boss enemies or capturing enemy source wells.