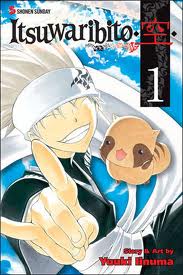 Itsuwaribito are the ultimate criminals: a combination of stealthy thieves, con artists and violent thugs. Consummate Liar Utsuho wants to be an Itsuwaribito—with a twist: he intends to use his lies for good and save a thousand people to carry on the dream of the old man who saved him.

Along the way he gathers some companions: