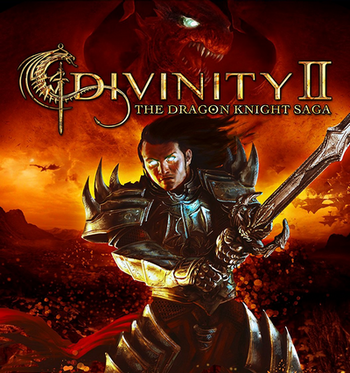 Divinity II: The Dragon Knight Saga is the sequel to the Belgian RPGs Divine Divinity and Beyond Divinity by Larian Studios. Originally released as Divinity II: Ego Draconis (2009), it was bundled with its own Expansion Pack Flames of Vengeance (2010) in a 2011 Updated Re-release under the subtitle The Dragon Knight Saga, and has been marketed as such ever since (especially since the game and the expansion are basically two halves of the same story). Divinity II was developed for the PC and Xbox 360, and released in German first before the international release a few months later.
Advertisement:

In the land of Rivellon, the Divine, the hero of Divine Divinity, was betrayed and murdered by his former allies, the dragons, shortly after his victory. As a result, almost all of the dragons have been exterminated by Dragon Slayers. The player starts the game as a new Dragon Slayer being given their powers, before news of a dragon comes and their squad leaves to track down the dragon. Through a turn of events, the new Dragon Slayer is instead made into a Dragon Knight, which the Slayers have sworn to kill, and is told that the true danger to Rivellon is not the dragons, but the evil which the dragons had been fighting: a man named Damian.

The expansion, Flames of Vengeance, picks up immediately after the main game. Through the manipulations conducted by his Not Quite Dead girlfriend, Damian has returned stronger then ever and the player is trapped in diamond. The player is eventually freed, and must now fight undo the damage they unwittingly caused by taking vengeance on Damian's lover who used and misled them and finally defeating Damian once and for all.

Halfway through the game, the character gets the ability to transform into a dragon and engage in aerial combat instead of ground-based combat. It has been praised for its clever writing (including the ability to mindread almost every NPC), amazing soundtrack and sense of exploration. The game could best be described as Gothic's gameplay meets Baldur's Gate II's roleplaying, with hints of Fable thrown in.

In 2012, a Developer's Cut edition of the game was released. In addition to containing enhanced versions of both Ego Draconis and Flames of Vengeance, it contains an optional Developer's Mode that allows you to tweak your character, spawn certain monsters, and more.