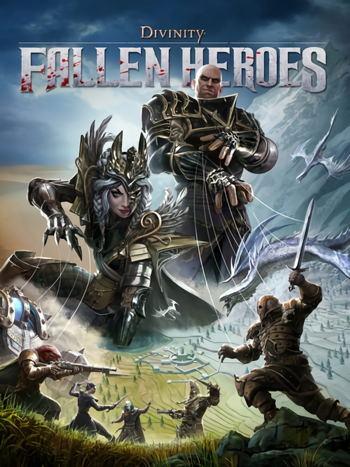 Divinity: Fallen Heroes is an upcoming Turn-Based Tactics game and the seventh entry in the Divinity series. The game is developed by the Danish company Logic Artists

(creators of Expeditions: Conquistador and Expeditions: Viking), and is published by Larian Studios, making it the first entry primarly handled by another developer.

The game runs on the Divinity: Original Sin II engine, and is story-wise a more-or-less direct follow-up to that game, reuniting its six Origin Characters and the major NPC Malady in a new fight against the Bloodless. Gameplay-wise, it is a combination of Divinity: Dragon Commander's strategic gameplay and Original Sin duology's Turn-Based Combat, with you, as "the Commander", directing the main characters over the course of 60+ missions, which change considerably, depending on what you do.

Originally announced for a November 2019 release, it has since been delayed indefinitely